In 2015 the LBMSDG connected with the Royal Society of Chemistry’s Separation Science Group and we were pleased to announce that the best student talk in 2018 also carried a £400 prize!

For 2018, the LBMSDG Committee decided to split the award for the Most Valued Student Talk, given that the two chosen talks were scored equally and were both interesting, well-delivered and well-received. The awardees were Akshyeta Suryanarayan of the University of Cambridge and James Waddington of the University of Liverpool. 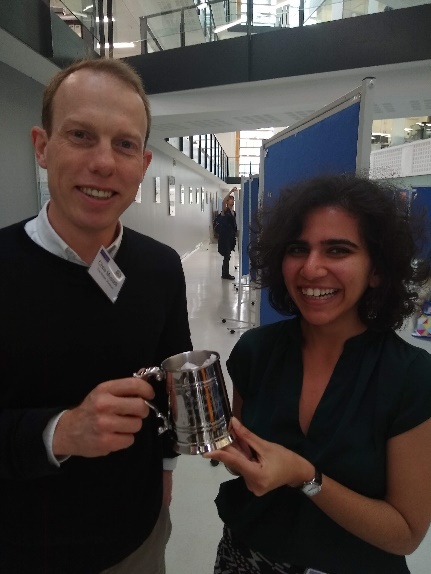 Akshyeta Suryanarayan talk entitled ‘What’s in the pot? Characterising natural substances in archaeology through lipid and isotopic analyses’ focused on understanding how populations from the Indus Civilisation (c.3000-1300 B.C) used and processed organic products in ceramic vessels. Despite the importance of organic products in everyday domestic activities, this subject has rarely been investigated as the Indus script is not yet deciphered, with no textual references for organic commodities used by this society. Moreover, physical organic remains rarely survive in archaeological contexts, making it challenging to reconstruct ancient foodstuffs. Her research uses organic residue analysis, a method in archaeology that uses chromatographic and spectrometric techniques to extract and identify absorbed organic remains within ancient vessels. The specific aims were to examine differences in culinary choices between urban and rural settlements in the Indus Civilisation, and to identify changes in culinary habits in the post-urban period (c.1900-1300 B.C), after dramatic societal transformation and climatic instability. She showed that vessels were dominated by signatures of meat products, possibly supplemented by plant-based and dairy products, with no differentiation between urban and rural settlements, however, the interpretation of data was challenging due to sub-optimal preservation and lack of region-specific references. Her work is the first large-scale study of culinary practices using organic residue analysis in South Asia and provides a new understanding of how Indus populations created their food 4000 years ago. Her talk was both interesting and stimulating and highlighted the challenges of molecular analysis from archaeological specimens. 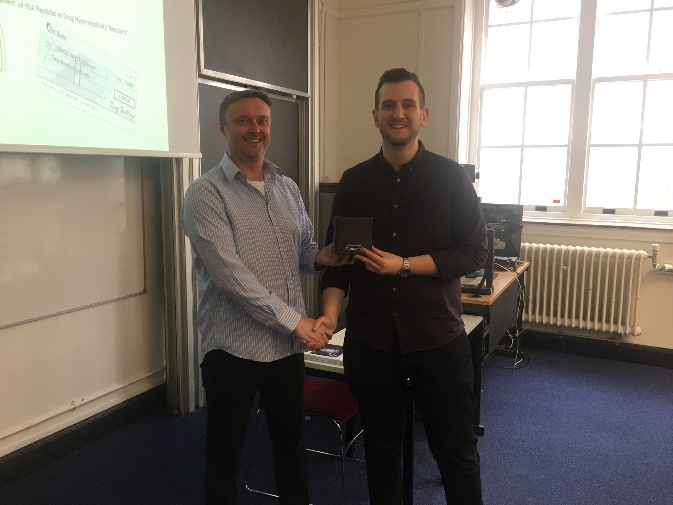 James Waddington’s talk entitled ‘Characterisation of the Involvement of HLA Peptides in Drug Hypersensitivity Reactions’ focused on mapping of the pathological mechanisms involved in flucloxacillin-induced liver reaction. Off-target protein modification was suspected to drive the reaction, either through non-immune mediated pathways, through the modification of peptides that are presented by the risk allele, or both. The project aimed to identify proteins haptenated by flucloxacillin using anti-flucloxacillin immunoprecipitation and characterisation by state-of-the-art mass spectrometry. Direct modification of HLA-B*57:01 protein was observed, which could lead to neo-antigens being presented. The global repertoire of peptides was interrogated and flucloxacillin found to alter the C-terminal amino acid on the majority of peptides, where an increase of phenylalanine and a decrease in tryptophan was observed. Of the 4,000+ peptides eluted from flucloxacillin treated C1R-B*57:01 cells, 6 peptides were fully annotated to show flucloxacillin-lysine covalent binding, with other partially annotated peptides indicating modifications. The work thus showed that drug-modified peptides are presented by HLA-B*57:01 and that global repertoires are altered by flucloxacillin. The talk was delivered well, interesting and highlighted the use of mass spectrometry to answer an important clinical question.